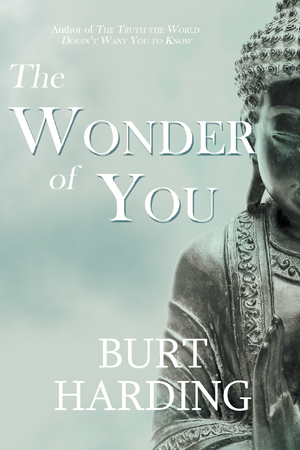 The Wonder of You

You are a human being–Being playing the human role. What we identify as one Being is a composite of what humans would perceive to be two separate beings. One is physical and the other spiritual—the human ego and the Light Being. One being flesh and blood human; the other a being composed entirely of light and spirit energy inhabiting the human body as its soul. Each one is independent, self-aware and possessed of its own unique inherent character traits, emotions, and nature. What you are about to read will free you from the shackles of fear. You will be given proof by your own discoveries. Read with an open mind and heart and see for yourself that freeing from the bondage of fear, guilt and suffering is your birthright.

Burt Harding offers a radical invitation to recognize the truth of our being as already whole and fulfilled. He reminds us of the love we really are beyond the emotions and personal stories we carry. In this way, we come to recognize how beautiful we really are in our essence. Burt lives and teaches in Canada.
www.BurtHarding.com

Awareness Trilogy Reviews
“I have read the author’s previous book (which was excellent…) and other non duality books (some of them were also great).
But here for the first time I saw a clear explanation about the difference between awareness and consciousness….

‘To be conscious of a thought is to identify with it as being there. See this clearly. Consciousness identifies with thought simply because consciousness creates the thought in the first place. Awareness, on the other hand, sees thought as a thought and not reality as consciousness does.’

Non duality is hard to explain because Awareness can’t be grasped with the 5 senses but luckily we have teachers who can give us pointers to understand it. Burt is one of those gifted teachers…” Gambit